All U.S. baby boomers should get a one-time test for hepatitis C virus (HCV) infection, according to draft guidelines released Friday, May 18, by the U.S. Centers for Disease Control and Prevention (CDC).

The draft guidelines, available for public comment through June 8, look to decrease the number of people born between 1945 and 1965 who are unaware of their HCV status. The age-specific universal testing recommendation is based on the facts that one in 30 baby boomers have been infected with HCV and most don’t know it.

Current CDC guidelines call for testing only individuals with certain known risk factors for hepatitis C infection. But studies find that many baby boomers do not perceive themselves to be at risk and are not being tested, likely because their risk for the infection—such as injection drug use and medical procedures involved blood products—occurred decades ago.

A recent survey by the American Gastroenterological Association underscores the lack of awareness among those between 47 and 67 years old: Almost three-quarters of baby boomers have never been tested or are unsure if they have been tested for HCV.

The CDC believes that testing all U.S. baby boomers once will address the largely preventable consequences of this disease, especially in light of newly available therapies that can cure up to 75 percent of infections.

More than 2 million U.S. baby boomers are infected with hepatitis C, accounting for more than 75 percent of all American adults living with the virus, the CDC estimates. The agency adds that baby boomers are five times more likely to be infected than other adults. Yet most infected baby boomers do not know they have the virus because hepatitis C can damage the liver for many years while leaving few noticeable symptoms.

More than 15,000 Americans, most of them baby boomers, die each year from hepatitis C-related illness, such as cirrhosis and liver cancer, and deaths have been increasing steadily for more than a decade and are projected to grow significantly in coming years.

The CDC estimates one-time hepatitis C testing of baby boomers could identify more than 800,000 additional people with hepatitis C, prevent the costly consequences of liver cancer and other chronic liver diseases and save more than 120,000 lives. 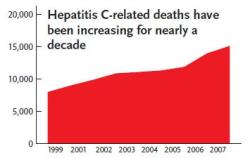 The agency also announced that it is releasing $6.5 million in funding to expand testing of hepatitis B virus (HBV) and HCV, increase earlier diagnosis, and enhance linkage to care, treatment and preventive services—similar to efforts under way to test people for HIV and improve linkage to, and retention in, medical care.

Funded efforts will focus on groups disproportionately affected by hepatitis B and C, including Asian-American Pacific Islander communities (because they have the highest rates of chronic HBV infection) and injection drug users and individuals born between 1945 and 1965 (because they are most affected by chronic HCV infection).

These efforts align with the U.S. Department of Health and Human Services’ Action Plan for the Prevention, Care and Treatment of Viral Hepatitis, which was released in May 2011.