Hepatitis C Is Now the Biggest Killer Among All Infectious Diseases

Additionally, CDC investigators published a paper in Clinical Infectious Diseases finding that in 2013 hep C–related mortality exceeded the combined total of deaths related to 60 other major infectious diseases reportable to the agency, including HIV, pneumococcal disease and tuberculosis (TB).

“Why are so many Americans dying of this preventable, curable disease?” Jonathan Mermin, MD, director of CDC’s National Center for HIV/AIDS, Viral Hepatitis, STD, and TB Prevention, said in a press release. “Once hepatitis C testing and treatment are as routine as they are for high cholesterol and colon cancer, we will see people living the long, healthy lives they deserve.” 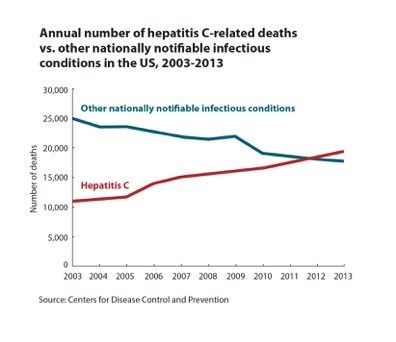 Baby boomers—those born between 1945 and 1965—are at greatest risk of hep C. Recently published research found that this disproportionate burden is likely a consequence of unsafe medical procedures conducted in the post–World War II period.

The preliminary surveillance data suggested a rising rate of hep C incidence among injection drug users (IDUs). Diagnoses of recent infections of the virus more than doubled between 2010 and 2014, to 2,194 cases. These cases were predominantly among young white IDUs who live in rural or suburban areas in the Midwest and Eastern United States.

“Hepatitis C often has few noticeable symptoms,” John W. Ward, MD, director of CDC’s Division of Viral Hepatitis, said in the same release. “We must act now to diagnose and treat hidden infections before they become deadly and to prevent new infections.”

To read a press release about the study, click here