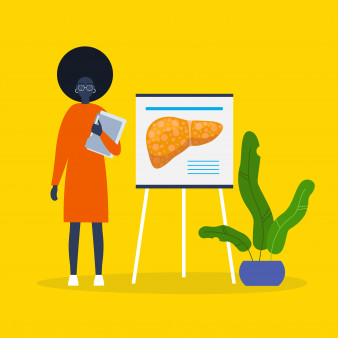 Hepatitis C is caused by the bloodborne hepatitis C virus, which infects the liver.

Hepatitis is a general term that means inflammation of the liver. Hepatitis has several possible causes, including viruses; toxins and chemicals, such as alcohol; fatty liver disease; and autoimmune conditions that cause the immune system to attack healthy tissue.

Hepatitis C is a curable disease caused by the bloodborne hepatitis C virus (HCV), which infects the liver. HCV can cause lifelong infection, fibrosis (mild to moderate liver scarring), cirrhosis (serious liver scarring), liver cancer, liver failure and death. It is one of the leading indications for liver transplants in the United States.

The Centers for Disease Control and Prevention (CDC) estimates that approximately 2.6 million people in the United States have chronic hepatitis C; in 2018, there were 50,300 new hep C cases. In 2018, chronic HCV infection accounted for more than 15,000 deaths in the United States.

Having HCV does not necessarily mean that serious liver disease will occur. What’s more, it can take several years—decades, in many cases—for hep C to cause life-threatening illness.

Soon after HCV enters the body, it infects cells in the liver called hepatocytes. Only a small number of people experience symptoms of early infection, such as fatigue, decreased appetite, nausea or jaundice (yellowing of the skin and eyes). About 15% to 25% of people with hepatitis C are able to clear the virus without treatment, usually within six months. Infants and young women are more likely to clear hepatitis C spontaneously; people living with HIV are less likely to do so. The majority of people with HCV develop chronic hepatitis C, which can be lifelong if left untreated.

HCV is spread via blood-to-blood contact. Transmission routes include sharing needles and other equipment for injecting drugs and sexual contact. HCV can also be transmitted from mother to child during gestation or delivery.

The CDC recommends HCV testing for all adults age 18 and older at least once in their lifetime and testing of all pregnant women during each pregnancy.


Individuals may be at risk for hepatitis C if they:

Hepatitis C is not transmitted by casual contact, such as coughing, kissing, sneezing or sharing food, beverages or utensils.

Supportive care for acute hepatitis C includes bed rest, drinking plenty of fluids and over-the-counter medications to manage symptoms. Studies have shown that direct-acting antiviral drugs (DAAs) are highly effective during acute infection, but because many people have no symptoms, it can be difficult to diagnose HCV at this early stage.

The advent of DAAs has revolutionized the treatment of chronic hepatitis C. (See Hepatitis C Treatment.) The goal of treatment is to decrease one’s HCV viral load to an undetectable level. Successful treatment halts fibrosis progression and may lead to fibrosis regression and improvement in liver function. In some cases, people awaiting liver transplants have improved enough to come off the waiting list. But if liver disease has already progressed to cirrhosis, the damage may not be fully reversible. This is why it is important to start treatment at an early stage.