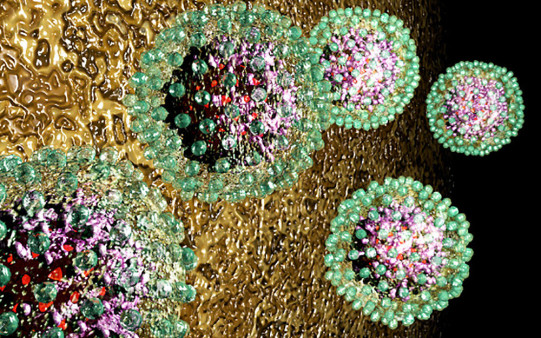 Hepatitis B Linked to Cancers Beyond the Liver

People with chronic hepatitis B virus (HBV) infection may be more likely to develop other malignancies in addition to hepatocellular carcinoma, the most common type of liver cancer, according to an analysis of nearly half a million people in China.

In particular, the researchers saw higher rates of cancers of the digestive system, including oral, stomach, colorectal and pancreatic cancers. These findings suggest that people with hepatitis B may benefit from earlier cancer screening.

Over years or decades, chronic HBV infection can lead to liver cirrhosis (scarring), liver cancer and end-stage liver failure. Globally, hepatitis B remains the most common cause of hepatocellular carcinoma—accounting for around a third of cases—although hepatitis C, alcohol use and fatty liver disease are gaining ground. Often detected late, liver cancer is among the leading causes of cancer-related mortality worldwide, accounting for an estimated 782,000 deaths in 2018, according to the World Health Organization (WHO).

Hepatitis B is endemic in much of Asia and Africa, meaning it is common in the population of those regions and is often transmitted from mother to child during pregnancy or delivery. Although HBV vaccination has been widely implemented in many countries and new infection rates are decreasing, WHO estimates that more than 250 million people are living with the virus.

Beyond its well-known link to liver cancer, associations between hepatitis B and other malignancies are not well understood. Studies have shown, however, that people with hepatitis C have a higher risk of various non-liver cancers, which may in part be attributable to inflammation or metabolic changes triggered by chronic viral infection.

As reported in JAMA Open Network, Ci Song, MD, of the School of Public Health at Nanjing Medical University, and colleagues set out to assess associations between chronic HBV infection and risk for all types of cancer.

They first looked at data from the China Kadoorie Biobank (CKB) prospective cohort study, conducted from June 2004 to July 2008. In this study, 496,732 participants had a dipstick blood test to screen for hepatitis B surface antigen (HBsAg), an indicator of active infection; 15,355 participants (3.1%) were found to be HBsAg positive—well below the national rate of around 8% in China.

Next, two smaller groups were used to validate the associations seen in the larger CKB group using more precise serum HBsAg detection tests. The Qidong cohort enrolled 37,336 participants between November 2007 and April 2011, of whom 9.5% were HBsAg positive. The Changzhou nested case-control study enrolled 17,723 participants between June 2004 and September 2005.

The researchers also tested tumor samples (97 stomach cancer, 10 pancreatic cancer and 9 lung cancer) to look for HBV replication (as indicated by the presence of HBV DNA), hepatitis B core antibodies (known as anti-HBc) and expression of hepatitis B X protein, which appears to trigger the development of liver cancer.

Over the course of 4.4 million person-years of follow-up, 20,891 new cases of cancer were reported in the CKB cohort. Participants who tested HBsAg positive had about a 16-fold higher risk of developing hepatocellular carcinoma compared with participants who were HBsAg negative. This was by far the strongest association.

In addition, the HBV positive group also had elevated rates of lymphoma (about twofold higher risk), pancreatic cancer (65% higher), oral cancer (58% higher), colorectal cancer (42% higher) and stomach cancer (41% higher). All these associations were statistically significant, meaning they were probably not driven by chance. No significant associations were observed between HBsAg positivity and any other cancer types.

Because the number of participants in the other two groups was small, the only associations with HBV that could be validated were a link with HCC (18-fold higher risk) and stomach cancer (twofold higher) in the Qidong cohort and with stomach cancer (76% higher) in the Changzhou case-control study. Only five cases of colorectal cancer were reported among HBsAg positive people in the Qidong group, and none developed oral cancer, pancreatic cancer or lymphoma, the study authors reported.

Looking at 22 anti-HBc–positive participants with stomach cancer in the Qidong cohort, 12 tumor samples (55%) tested positive for HBV DNA, and all the stomach cancer samples that were tested showed hepatitis B X protein expression. In contrast, among 25 anti-HBc–negative participants, no HBV DNA was detected in tumor samples. The same pattern was observed in people with pancreatic cancer but not in those with lung cancer, the researchers noted. However, non-liver cancer cells generally did not harbor detectable HBV cccDNA—an intermediate form of genetic material produced during viral replication—indicating that HBV may not actively replicate in tissues other than the liver.

In their discussion, the authors noted that several previous studies found that HBV was associated with pancreatic cancer and lymphoma, though one European cohort study did not see an increased risk. Interestingly, hepatitis C is also linked to lymphoma. Some researchers have also reported associations between HBV and additional cancer types, including lung, kidney, gallbladder, ovarian, thyroid and skin cancers and leukemia, though patterns were not consistent across studies.

Speculating about how HBV may increase cancer risk, the authors suggested that “chronic inflammation induced by HBV infection might play a role in the development of cancer.” However, the observation of HBV antibodies and hepatitis B X protein expression in stomach and pancreatic cancer samples but not lung cancer samples supports a “unique underlying mechanism of action rather than a general influence of the immune system,” they wrote.

People at risk for liver cancer are advised to undergo screening every six months with alpha-fetoprotein (AFP) blood tests and ultrasound scans. Experts recommend that people at average risk should undergo regular colon cancer screening with colonoscopies or fecal blood tests starting at age 45 or 50. Dentists typically look for signs of oral cancer during routine exams. Screening for stomach cancer is not routinely done in the United States, but X-ray and endoscopic screening, as well as testing for Helicobacter pylori (bacteria that cause stomach cancer), is recommended in some Asian countries where it is more common. At this time, no standard screening test for pancreatic cancer is available, but this is an active area of research.