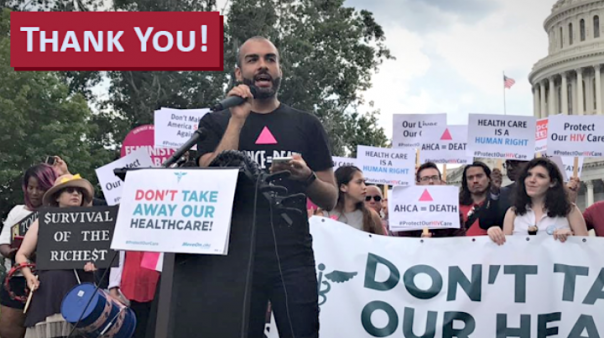 That doesn’t mean Republicans will abandon their efforts after the September 30 deadline.

How fitting that on National HIV Call-In Day to Save Health Care—Tuesday, September 26—Republican senators gave word that they would not vote this week on repealing the Affordable Care Act (ACA, or Obamacare).

“We haven’t given up on changing the American health care system. We aren’t going to be able to do it this week,” Senate Majority Leader Mitch McConnell told reporters after a closed-door luncheon this afternoon, reports The Associated Press.

Senators had until Saturday, September 30, to pass health care reform under budget reconciliation rules. This would allow them to pass a bill with just 50 votes, plus a tiebreaker from Vice President Pence, as opposed to the usual 60 votes needed to get a bill past a filibuster.

It was expected that the latest iteration of the Republicans’ repeal attempt, called the Graham-Cassidy bill, would be voted on this week, but the GOP apparently lacked the needed votes. The bill needs 50 of the 52 Republican senators to vote for it in order to pass. As The New York Times points out, once again, at least three GOP senators said they did not support the bill.

You’ve done it again! Once more, we asked you to step up to the plate and stop the GOP’s efforts to repeal and replace the Affordable Care Act. And, just like you have all year, you answered the call and let your Members of Congress know that the ACA is here to stay!

By stopping the Graham Cassidy bill, you have helped ensure that up to 32 million Americans don’t lose their health insurance while preventing discrimination against people living with pre-existing conditions like HIV. It was only through the power of our collective advocacy that we were able to kill this bill!

However, the danger is certainly not passed. The current Congressional majority leadership and the administration have made it clear they will continue to try and pass ACA repeal. But for now, relax, and enjoy your victory!

We truly cannot thank you enough for all the calls and hard work you’ve put in to lead us to this successful outcome!


But wait! Republicans are not giving up. Although it’s almost certain they’ll never have the 60 votes needed to pass a bill in the ordinary method, as Vox points out, Republican lawmakers are already looking for ways to pen a new resolution that works with the budget reconciliation rules.

And to see how dangerous the Graham-Cassidy bill is for people with HIV—and tens of millions of other Americans—click here.