This finding stresses the need to reduce the risk of sexual transmission of hep C among HIV-positive men who have sex with men.

HIV-positive men living in New York City who clear hepatitis C virus (HCV), whether spontaneously or through treatment, are reinfected with hep C at a high rate that is comparable to that of their European counterparts.

Previous studies conducted among HIV-positive MSM in Europe have found that those treated for hep C with interferon-based regimens have annual reinfection rates of 3 to 15 percent. To date, there are no data available regarding HCV reinfection rates in similar cohorts in the United States or among those cured of the virus with direct-acting antiviral (DAA) treatment.

U.S. researchers, therefore, analyzed data on clearance of HCV among the HIV-positive MSM in their New York City cohort, the New York Acute Hepatitis C Surveillance Network. Hep C clearance was defined as a sustained virologic response 12 weeks after completing therapy (SVR12, considered a cure) or, among those who were not treated for the virus, an undetectable viral load for at least 12 weeks to indicate spontaneous clearance.

Daniel S. Fierer of the Icahn School of Medicine at Mt. Sinai in New York City presented findings from the study at the 2019 Conference on Retroviruses and Opportunistic Infections (CROI) in Seattle. His team identified 305 HIV-positive MSM who cleared HCV and about whom there were at least four weeks of follow-up data. 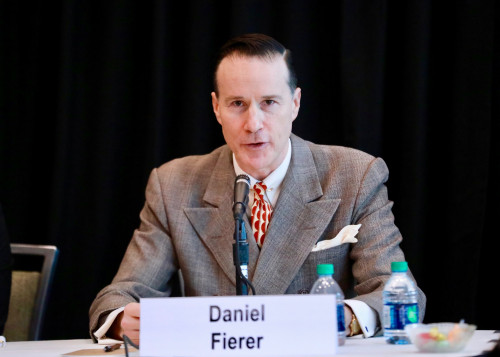 Daniel Fierer of the Icahn School of Medicine at Mt. Sinai in New York, speaking at CROI 2019Benjamin Ryan

Thirty-eight (14 percent) of the men had 44 hep C reinfections between them, which were diagnosed between 2006 and 2018. The first reinfections (as opposed to subsequent reinfections) occurred a median of 1.9 years after the men were previously cleared of HCV.

Overall, the reinfection rate was 4.4 cases per 100 cumulative years of follow-up, which is more than seven times greater than the rate of first-time HCV infections among MSM in New York City. Such a finding, Fierer indicated, is a sign that DAA treatment for the virus is not sufficiently reaching local MSM. He stressed the difficulty of gaining approval for coverage of DAAs from insurers.

Fierer and his colleagues concluded that their findings suggest that HIV-positive MSM who clear HCV should receive long-term monitoring for hep C reinfection. Additionally, strategies to lower HCV reinfection rates in this population are warranted.

“I think we’ve come a long way from the ‘Just Say No,’ era and need to address the very real issues of addiction,” Fierer said, alluding to the contribution of drug use to the risk of sexual transmission of HCV among HIV-positive MSM.

“I viewed this study as a way to alert us to the need to spend more time on prevention” of HCV, Fierer said, referring to the members of his field of infectious disease physicians.