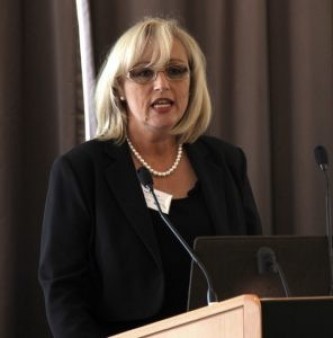 A Fighter by Nature – Tatjana Reic and the Viral Hepatitis Story

The experts in the European Liver Patients Association (ELPA) Hep-CORE advisory group provide a window on the broad range of hepatitis activities and perspectives in Europe today. Hep-CORE PI Jeffrey Lazarus has been interviewing some of them about how they came to work with viral hepatitis, how the field has been changing, and what new research is called for.

Today when I look back it seems like it must have been somehow written in the stars – me and the viral hepatitis story.

36 years ago, at the age of 20 in the middle of the summer of 1980, I was hospitalized with a diagnosis of Acute Hepatitis B (HBV). At that time in my medical record, besides positive so-called Australian antigen, the clinicians also had written “NON A NON B.” I didn’t know what that meant. The doctors also did not pay a lot of attention to non A non B. After 35 days spent in the hospital I simply continued with my life; as a reconvalescent I was not the best model of patient. However, per the doctor’s instructions I regularly checked my liver enzymes for the next 5-6 years and then practically forgot about my illness.

So at the age of 34 I got married and pregnant – the most exciting period in my life – I was going to become a mother, oh how great that feeling was! Although by that time it was 1994 – and there was war in Croatia. Because of my history of hepatitis B, I was referred for a blood test on viral hepatitis during my pregnancy. And that’s how I became aware of my diagnosis: Chronic Hepatitis C (cHCV). The illness was unknown to me at the time so I tried to find out more about it but found little help even from close family members who were medical professionals.

My daughter was born anti-HCV positive, PCR undetectable. Although I was advised by my treating physician that her antibodies should be eliminated in 6-12 months it did not happen. Instead it took 4 years and gave me sleepless nights for the first 4 years of her life. I thought, “Oh my God, what have I done to the most precious person in my life, I transmitted her a deadly threat disease”.

In the meantime, I lost my job and started my first treatment with interferon monotherapy – injections 3 times per week for 52 weeks. That was really tough. At that time the was war coming to the end and I was looking for a job as doctor of veterinary medicine. But with a small child, at the age of almost 40 and with a chronic (stigmatized) disease, it was practically impossible. On top of this I was still going through multiple strenuous treatments. Deep depression overtook me.

However, since I am a fighter by nature I decided to do take things into my own hands, so I completed my degree as a Master of Science. In 2000 my life started to completely change. I established the first Croatian hepatitis patient group, joined the European Liver Patients Association (ELPA) in 2005, became ELPA Vice-President in 2007 and since 2011 have been the ELPA President.

Finally, in 2010, when WHO endorsed World Hepatitis Day as only the fourth disease-specific official day, coincidentally appointing it to the day of my birthday – July 28, I began to truly realize my mission and my passion on this Earth – to contribute in the global fight for hepatitis patients’ rights and the right to not be neglected any more.

So my short answer to your question is – I was a patient highly motivated to fight for my life, integrity, dignity, decent job and the future of my children.

I can easily speak about that topic from my own experience as I failed 6 very, very tough interferon treatments: 4 out of 6 treatments were with “old” non-pegylated IFN and 1 was a 72-week PEG/RIBA treatment. In total I have spent 5-6 years of my life on IFN treatment. This is the equivalent of 292 weeks, or 2,044 days – after all that the treatments still failed.

Later, luckily, I spent 12 more weeks dedicated to my 7th treatment, this time with direct-acting antivirals (DAAs), and today I am cured. Going through treatment with DAAs was like chewing gum compared with IFN treatments.

But I have no regrets. I am sure that the interferon helped postpone the progression of liver fibrosis and kept my liver damage at a comparatively mild level for all those decades, about 22 years after being diagnosed and 35 years since I initially contracted the virus, helping me survive.

Besides my own experience it is evident that viral hepatitis, in particular the field of HCV, has significantly changed.

We have seen revolutionary achievements in the field of treatment. The dreams of every patient who went under IFN treatments finally came true – drugs that can cure almost 100% of patients with almost no side-effects during 4 times shorter duration of treatment. That’s real perfectavir.

Additionally, global awareness of viral hepatitis in general is much higher since the WHO endorsement of World Hepatitis Day.

At the end it is important to stress that with recent 69th World Health Assembly’s adoption of first-ever Global Health Sector Strategy (GHSS) on Viral Hepatitis in Geneva has generated strong political will. The GHSS states a goal to eliminate hepatitis B and C by 2030 and includes prevention and treatment targets to reduce annual deaths by 65% and increase treatment by 80%. It was unanimously adopted by 194 Member States in a historic commitment, signaling the greatest global policy development in the field of viral hepatitis ever.

What areas of viral hepatitis research do you think are still being neglected?

Let’s not fool ourselves – in the past decade a lot has been done in the viral hepatitis field, but a lot more is still on our TO DO list.