The once-daily regimen includes the integrase inhibitor bictegravir plus the contents of Descovy (emtricitabine/tenofovir alafenamide).

Size-wise, Biktarvy now becomes the smallest integrase-inhibitor-based single-tablet antiretroviral (ARV) regimen on the market today. The regimen performed well in clinical trials on measures of safety and tolerability as well as the emergence of drug-resistant virus. 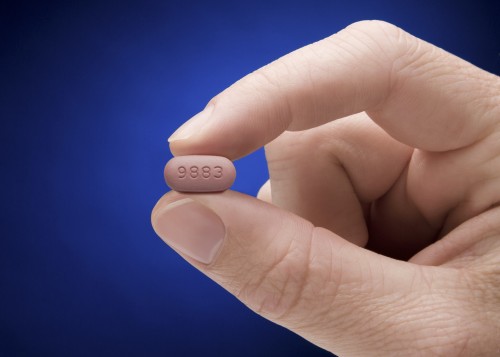 The FDA has specifically granted approval for Biktarvy’s use among adults who are starting HIV treatment for the first time or who are switching from an effective ARV regimen and who: have had a fully suppressed viral load (below 50) for at least three months; have no history of HIV treatment failure; and have no evidence of mutations to their virus that are associated with resistance to the three ARVs included in the tablet.

Gilead’s new regimen has received a black box warning, the FDA’s highest level of caution, regarding the potential for those who have both HIV and hepatitis B virus (HBV) to experience severe acute exacerbations of hep B after going off Biktarvy. Clinicians should closely monitor the liver function of people with HIV and HBV after they discontinue Biktarvy, maintaining this watchful eye for at least several months. According to Gilead, “If appropriate, anti–hepatitis B therapy may be warranted.”

This warning is based upon research findings regarding individuals with HIV and HBV who discontinued ARV regimens containing tenofovir disoproxil fumarate and emtricitabine. Tenofovir disoproxil fumarate, or TDF, is the older version of the ARV tenofovir alafenamide, or TAF, which is included in Biktarvy along with emtricitabine. (Research indicates that TAF is safer for the bones and kidneys than TDF.)

All this considered, before prescribing patients Biktarvy, health care providers should test them for hepatitis B virus (HBV) and also test their kidney function at that point and monitor the organ’s function during Biktarvy treatment.

Biktarvy’s regulatory approval was based on data from four ongoing Phase III trials of the regimen, including Studies 1489 and 1490, which include those who started HIV treatment for the first time, and Studies 1844 and 1878, which include those who began the study with a fully suppressed viral load as a result of taking a different ARV regimen. Together, these studies are populated by a diverse group of 2,415 people living with HIV, including a wide swath of age ranges as well as significant representation by nonwhite individuals.

The studies were primarily geared to determine whether Biktarvy suppressed HIV at rates comparable to other ARV regimens after 48 weeks of treatment; on this count, the regimen succeeded in all four trials. Thus Biktarvy was determined noninferior, or as effective as, to the other regimens.

Additionally, by the 48-week mark, none of those treated with Biktarvy saw their virus develop resistance to the treatment—nor did any participant stop taking the regimen because of adverse kidney-related health events.

The most common adverse health events reported in the trials were diarrhea, nausea and headache, which occurred in a respective 6 percent, 5 percent and 5 percent of study participants.

In Study 1489, 629 adults beginning HIV treatment for the first time were evenly randomized to receive Biktarvy or Triumeq (dolutegravir/abacavir/lamivudine). After 48 weeks of treatment, the respective proportion of each group that had a fully suppressed viral load was 92.4 percent and 93 percent.

In Study 1490, 645 first-timers to treatment were evenly randomized to receive Biktarvy or Tivicay (dolutegravir) plus Descovy (emtricitabine/tenofovir alafenamide). (In other words, the regimens were identical except for the integrase inhibitor component: The participants took either bictegravir or Tivicay.) At the 48-week mark, a respective 89.4 percent and 92.9 percent of those taking each regimen had a fully suppressed viral load.

Study 1878 included 577 people with a fully suppressed viral load who were taking regimens including a boosted protease inhibitor—Reyataz (atazanavir) or Prezista (darunavir)—plus two NRTIs—Epzicom (abacavir/lamivudine) or Truvada (tenofovir disoproxil fumarate/emtricitabine). The participants were evenly randomized to stay on their current regimen or to switch to Biktarvy. After 48 weeks, 1.7 percent of those in each of the two treatment groups had a viral load greater than 50. At that time, the respective viral suppression rates of those who switched to Biktarvy and who did not switch were 92.1 percent and 88.9 percent.

Findings from Study 1844 are forthcoming. Gilead intends to present them at an upcoming scientific conference, so it is possible this information will be a part of the 2018 Conference on Retroviruses and Opportunistic Infections (CROI) taking place in Boston in early March.

Other upcoming scientific presentations about Biktarvy expected this year will reveal results from ongoing trials of the drug in a women-only study group as well as a study in adolescents and children.

To read a press release about the FDA approval, click here.