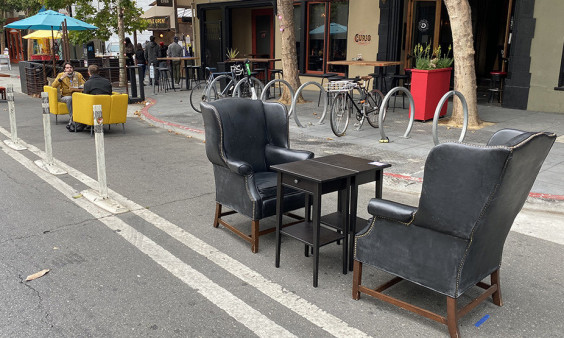 Is Dining Out a Risk Factor for COVID-19?

A new CDC study leaves the question of indoor versus outdoor dining unanswered.

People who tested positive for the new coronavirus were more than twice as likely to report that they had recently eaten at a restaurant, according to a recent study from the Centers for Disease Control and Prevention (CDC). But the analysis did not distinguish between indoor and outdoor dining, leaving a key question unanswered.

Reassuringly, several other common activities—including going to offices, salons and gyms, attending religious services and using public transportation—were not linked to a greater likelihood of having the virus, although only a minority of the study participants reported these activities.

As the COVID-19 crisis drags into its seventh month, many people are ready to socialize, and business owners are eager to reopen. But many questions remain about which activities can be done safely. Studies to date have shown that the virus spreads most readily in crowded indoor settings, outdoor transmission appears to be uncommon and wearing a face mask reduces the risk of transmission.

Kiva Fisher, PhD, of the CDC’s COVID-19 Response Team, and colleagues looked at community and close contact exposures among symptomatic adults who were tested for the new coronavirus (officially known as SARS-CoV-2) at 11 outpatient health facilities or test sites across the United States during July 2020. The participants lived in states that have reopened at various levels.

Participants were asked about their activities during the two weeks before they became ill, including gathering in a home, shopping, dining at a restaurant, frequenting a bar or coffee shop, using pubic transportation or going to an office, salon, gym or religious gathering. Nearly 90% reported that they had gone shopping, and just over half said they had gathered in a home with 10 or fewer people on at least one of those days. Fewer than half reported engaging in any of the other activities.

The participants also reported whether they wore cloth face masks and practiced social distancing; 71% of people who tested positive and 74% of those who tested negative said they always used face coverings in public.

Not surprisingly, the researchers found that people who tested positive for SARS-CoV-2 were more likely to report that they had been in close contact—meaning within six feet for at least 15 minutes—with a person known to have COVID-19 (42% versus 15%, respectively). A majority of these close contacts were family members.

There were no significant differences in the proportion of SARS-CoV-2 positive and negative participants who reported any of the other activities. About a quarter had gone to an office, about 16% had visited a salon, about 14% had gathered in a home with more than 10 people and about 6% had used public transportation; only 8% of positive and 5% of negative participants had attended church or other religious gatherings.

“Eating and drinking on-site at locations that offer such options might be important risk factors associated with SARS-CoV-2 infection,” the researchers concluded. “Efforts to reduce possible exposures where mask use and social distancing are difficult to maintain, such as when eating and drinking, should be considered to protect customers, employees and communities.”

“Reports of exposures in restaurants have been linked to air circulation,” they added. “Direction, ventilation and intensity of airflow might affect virus transmission, even if social distancing measures and mask use are implemented according to current guidance. Masks cannot be effectively worn while eating and drinking, whereas shopping and numerous other indoor activities do not preclude mask use.”

The CDC did acknowledge that there were limitations to this study, including the fact that its “I went to a restaurant” option didn’t differentiate between indoor or outdoor dining. https://t.co/sZsx37eQJq

Given what we know about the likelihood of indoor versus outdoor transmission of SARS-CoV-2, the fact that this analysis did not distinguish between indoor and outdoor dining is a major limitation. It’s possible that most or all of the risk of restaurant dining was attributable to indoor settings.

What’s more, bars and coffee shops are quite different—several COVID-19 clusters in cities around the world have been linked to bars—and it’s possible that most or all of the risk associated with this combined category was attributable to bars rather than cafes. Here, too, the study did not distinguish between indoor and outdoor venues.

The study offers some interesting data to help people make decisions about which activities they might feel comfortable resuming. It’s notable that frequenting salons, gyms and religious services (again, no distinction was made between indoor and outdoor gatherings) and using public transportation were not associated with greater risk of testing positive for the coronavirus in this analysis. But the findings also point to areas where more information is still needed.