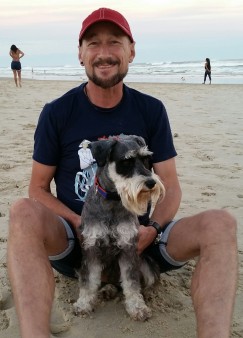 For the vast majority of people, hepatitis C is not transmitted through sexual contact. So when I was diagnosed in 2001, I had no idea what to think. As it turns out, my partner and I were part of an emerging epidemic of sexually transmitted hepatitis C affecting HIV-positive gay men in big cities like London, Berlin and Sydney. We had no idea we were at risk because there was no information about transmission through sexual contact. Sadly, that’s still the case for the hundreds of men like us who continue to be infected because they don’t understand the risk.

Because I’ve had HIV for years I am really tuned into what’s happening with my body. I sought out the hep C test because I knew something was wrong. I was initially told I was negative for that virus, but I sought a second opinion from my HIV doctor who subsequently diagnosed me with hepatitis C. My first reaction was to be really angry that there had been no health campaign warning me that I might be at risk. I wasn’t frightened by it, because I had a high level of health literacy, but I was determined to get rid of it. I read all of the horror stories about the side effects of treatment and the low success rate, but I just didn’t think that would apply to me.

My experience with HIV treatment had taught me that medication is a friend. Medication had brought my HIV under control and I was getting on with my career and my life. I thought it would be the same for hep C treatment, but I couldn’t have been more wrong. In 2006, I started 48 weeks of interferon and ribavirin therapy. At first, it was tolerable and the virus quickly became undetectable in my system. As the weeks went on, the range and intensity of side effects mounted up. I was functioning at a very low level and eventually became anemic. I remember shivering uncontrollably when I was cold and couldn’t warm up. My skin was so itchy that I could hardly bear my clothes touching me—it felt like the treatment would never end and I would never have my life back again. However, I got through it with the help of antidepressants and I was clear of the virus at the end of the treatment period.

Not long after, when getting the results of my regular blood test, I received news that I had never considered—the virus had come back. I knew it was possible for hep C to return within six months of finishing treatment, but I never thought it could happen to me. Things didn’t get better from there, either, because somewhere along the way, I had infected my partner of 18 years with hep C.

From that moment onward, we took our first steps down a dark and difficult path in our lives. I had infected the person I loved the most. As my partner said, “At least we don’t need to worry about me getting infected anymore,” which was some small consolation. In any case, we were determined to get rid of the virus.

After carefully considering our options and planning for the future, we decided we would both be treated at the same time in 2008, with another 48 weeks of interferon and ribavirin. I really struggled, experiencing the same side effects as the first time. Even though I knew what to expect, it wasn’t any easier. To make matters worse, we both lost our jobs and were in no position, physically or psychologically, to go to job interviews. It was a very tough year but we supported each other through it. We were both encouraged by having undetectable virus throughout the treatment.

At the end of treatment, we sat in the doctor’s office waiting for the final results, elated at the thought of the chance to start a new chapter of our lives. My partner had cleared the virus, but for me, the virus was back again—this time just one week after the end of treatment. It was the lowest point in my life—sitting in the doctor’s office, crying like a baby. I couldn’t believe it had happened all over again.

Since there were no other treatment options for me, we resigned ourselves to getting on with our lives, being careful not to pass the virus between us again, which we succeeded at for four years. It seems unbelievable to most who hear my story, but in 2012, despite our very best efforts to avoid it, my partner was reinfected. We had worked so hard and come so far, but we were back to square one.

He went through a gruelling 24 weeks of treatment, putting our lives on hold once more to clear the virus. He was successful once again and I couldn’t be happier for him. However, the possibility of me reinfecting him is still an issue for us, until I can be cured. Living with the virus is not easy and I realize it won’t get any easier.

I have had such a difficult time undergoing treatment twice already without achieving a cure. There is now so much riding on it, I need a therapy that won’t drag me down for months on end and cause me to put my life on hold. Most of all I need to be sure that treatment will succeed before I put myself through this hellish ride once more. New, more effective and safer treatments that don’t have terrible side effects are already available in many other countries around the world; why is Australia so far behind?

What is your greatest achievement?
Being respected by my peers for doing what comes naturally

What is your greatest regret?
That my mother didn’t live long enough to see her son become a man

What keeps you up at night?
I hate bigots. Everyone is entitled to their own views, but I hate people who try to inflict their views or their morals on others.

What is the best advice you ever received?
When I bought my first motorbike, a friend told me, “You will fall off and it will hurt.” When I was having difficulty with my HIV medication, my partner encouraged me to think of the meds not as a problem but as a friend.

What person in the viral hepatitis community do you most admire?
Charles Gore, who established the World Hepatitis Alliance. When I was working for him in 2007, I remember the day he asked me if there was an international organization behind World Aids Day.

What drives you to do what you do?
I believe passionately in the greater involvement of positive people in the health, social and structural responses to hepatitis C, including government, clinical, research and civil society responses. In simple terms, nothing about us without us.

What is your motto?
Make friends with straight people and be nice to them because, very generously, they will produce our next generation.

If you had to evacuate your house immediately, what is the one thing you would grab on the way out?
My dog, Fritz.

If you could be any animal, what would you be? And why?
A cat, because sometimes I don’t give a shit either.