This is according to a large study including a median three years of follow-up.

Researchers analyzed data on 4,731 members of the longitudinal Chronic Hepatitis Cohort Study (CHeCS), which is a cohort of people with hep C that is diverse both according to race and geography and is drawn from four large U.S. health systems. The members of the cohort analyzed all had no prior history of type 2 diabetes or hepatitis B virus (HBV) and all received treatment for hep C.

The investigators examined the cohort members’ baseline type 2 diabetes risk factors, including their age, gender, race, hep C treatment outcome, viral genotype and Fibrosis-4 (FIB4) score (which indicates the severity of their liver disease). The study authors then looked for cases of type 2 diabetes that developed either after individuals were pronounced cured or 12 weeks after they were considered to have experienced treatment failure, through the end of 2015.

Results were presented at the Annual Meeting of the American Association for the Study of Liver Diseases (AASLD) in Washington, DC.

The cohort members were followed for a median of three years. During this time, 5.9 percent (176 of 2,971) of those who were cured of hep C developed type 2 diabetes, compared with 18.7 percent (330 of 1,760) of those who experienced treatment failure. The researchers determined that being cured of hep C, compared with experiencing treatment failure, was associated with a 28 percent reduced risk of developing type 2 diabetes. This effect remained consistent regardless of baseline risk factors.

Compared with white individuals, Black and Asian-American cohort members were a respective 1.9-fold and 1.5-fold more likely to develop type 2 diabetes, regardless of their baseline body-mass index (BMI). Having genotypes 1 or 4 of hep C was not associated with a risk of type 2 diabetes.

Honor International NASH Day 2021—Your Liver Will Thank You! 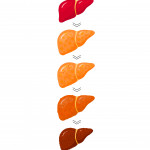 NAFLD Screening of People With Type 2 Diabetes Is Cost-Effective