Cured of his hepatitis C, he now fights for Americans with viral hepatitis. 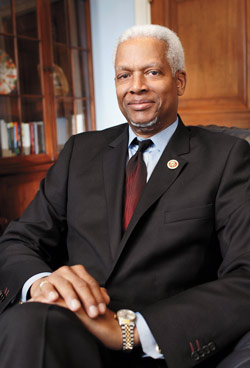 When describing his emotions over receiving a cure for hepatitis C in 2012, U.S. Representative Hank Johnson had this to say: “I could not express myself more than just a scream of delight.”

The Democratic congressman, who represents DeKalb County in the eastern suburbs of Atlanta, and who describes himself as “a humane, compassionate progressive,” is now advocating for all Americans affected by viral hepatitis, ready to stand strong as a public face of the disease.

Not so long ago, though, he was silent about his condition, which he discovered after visiting the doctor with complaints of chronic fatigue in 1998. He was elected to Congress in 2006 and, concerned about his political future, kept his hep C status secret.

Unable to wait for newer, simplified therapies with fewer side effects,  Johnson chose a lull between election cycles to undergo a third round of treatment after two failed attempts. Of the six months spent on therapy, he says, “I never felt worse in my life.”

This coincided with the fight in Congress to pass the Affordable Care Act (ACA). Serving as a regional whip, he was a key player in mobilizing efforts to pass the landmark health care legislation. As he struggled with the treatment’s devastating side effects, he reminded himself of how fortunate he was to have excellent health insurance and was driven all the more to fight the good fight on behalf of the American people.

“I did not want to be just one of the chosen few” with health coverage, he says. “I think everyone should have the ability to become healthier.”

Meanwhile, his weakened physical condition and rapid weight loss, his tendency toward forgetfulness and inarticulate speech, and his increasing reluctance to make public appearances in his district were starting to raise questions. Eventually, these concerns threatened to derail his 2010 election campaign.

When a reporter confronted him about rumors suggesting he was sick and dying, Johnson “had to decide whether to come out of the closet or not—to borrow a metaphor from my friends in the LGBT community.

“Maybe I can be of service to remove the stigma of hepatitis C,” he decided, and came out loud and proud. In addition to receiving the moral support and love of his colleagues, he soared soundly into another term with 75 percent of the vote.

He was not so lucky with his third round of treatment, however. So he then braved a fourth and final round and was pronounced cured in time for the 2012 election season.

Johnson says his experience with hep C has taught him to be freer with himself and to accept his flaws and positive attributes alike. It’s also taught him to become less self-focused.

“I became more concerned about other people,” he says, “and the fact that there are so many who will never know that they have hepatitis C until they’re getting ready to need a liver transplant, or they’re getting close to death from liver cancer.”

Now, the man who was told he had 20 years to live after his initial diagnosis sees a radiant future before him.