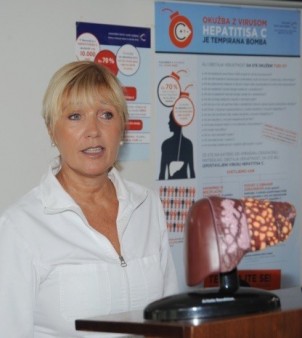 A Clinician’s Career in Viral Hepatitis: A Powerful History and Optimistic Future

The experts in the European Liver Patients Association (ELPA) Hep-CORE advisory group provide a window on the broad range of hepatitis activities and perspectives in Europe today. Hep-CORE PI Jeffrey Lazarus has been interviewing some of them about how they came to work with viral hepatitis, how the field has been changing, and what new research is called for. The eighth interview in the series is with Dr. Mojca Matičič, Head of the Viral Hepatitis Unit at the Clinic for Infectious Diseases and Febrile Illnesses, University Medical Centre Ljubljana, and Head of the National Viral Hepatitis Expert Group in Slovenia.

It is quite an interesting story since timewise my personal medical career coincides with the history of hepatitis C.

In the beginning of the 1990s, I started my career as a clinician at the national referential center for HIV/AIDS at the Clinic for Infectious Diseases and Febrile Illnesses, University Medical Centre Ljubljana. There, I also performed the research for my master’s degree, which focused on the first-ever detection of HIV in gingival fluid.

After finishing my specializations in internal medicine and in infectious diseases, I received a grant to serve as a visiting doctor in the field of STIs and HIV/AIDS at the Middlesex Hospital and Royal Free Hospital in London. There, I witnessed the famous Concorde study on the first HIV/AIDS treatment with azidotimidine. At the same time, more or less accidentally, I attended the lectures on viral hepatitis at the Royal Free, led by the legendary authority in that field, Dame Sheila Sherlock.

Upon returning to my home clinic in Slovenia, I was appointed to lead the Unit for Viral Hepatitis. It was quite a shock to move from one of the most promising and exciting fields of medicine, HIV/AIDS, to the field of viral hepatitis, where no specific treatment was foreseen at the time. I was initially disappointed as an ambitious young clinician to have shifted to simply advising patients on how to have a healthy lifestyle and performing regular medical follow-ups with no active medical interventions for their disease.

But by the late 1990s the hepatitis C landscape began evolving quickly to become quite a challenge. Simple diagnostic tools and the introduction of the first specific treatments began to look very promising. I even participated in the epidemiological puzzle, which was the first-ever discovery of the hepatitis C virus in gingival fluid, which became my PhD thesis. The need for organized national interventions led to the establishment of a multidisciplinary National Viral Hepatitis Expert Group in 1997, which I chair to this day.

We immediately set up the Slovenian national strategy on managing hepatitis C, where special attention was focused on managing HCV infection in people who inject drugs. Over the following years much effort was put into awareness campaigns, education, screening programs, availability and access to treatment and research including a permanent evaluation of HCV treatment efficacy and safety. The results were getting better and better.

So, in retrospect, hepatitis C became the most exciting and fulfilling story of my professional life. I would never change it to any other medical field including that of HIV/AIDS. Over time, my Tuesdays, when I run the hepatitis outpatient clinic, turned from the most depressing days in the era of interferon-based treatment into the most exciting ones thanks to the introduction of direct acting antivirals (DAAs). Seeing all those happy faces of my cured patients is by far the best reward a clinician can get.

Over the last two decades, enormous progress has been made in the field of viral hepatitis, hepatitis C in particular. At first, managing HCV seemed like it would be a similar story to that of HIV/AIDS management, with which I was quite familiar. But at a certain moment the hepatitis C story shifted and began its own path towards goals that exceeded even those set forth for HIV/AIDS.

A fortuitous aspect of HCV is that, during its lifecycle, the virus does not enter the nucleus of liver cells. This made it possible for antivirals to eliminate the virus from the body, which is not the case in HIV or HBV infections. Because of this, the current antiviral medications have thus far been ineffective in eradicating either HIV or HBV from the cellular nucleus.

Today we are witnessing a historical moment, a real breakthrough in medical history, since hepatitis C represents the first-ever curable chronic viral infection. Moreover, projection studies have shown that extremely effective, safe and patient-friendly treatment may lead to excellent control and likely even the elimination of hepatitis C – despite no vaccine being available.

What areas of viral hepatitis research do you think are being neglected?

In the sparkling light of hepatitis C achievements, the treatment of hepatitis B has definitely been a Cinderella-story over the last ten years. However, significant discoveries that have recently been made in the biology of HBV may open new perspectives in drug discovery.

Much work remains to be done in the hepatitis C arena, particularly from a global and public health perspective. Progress has not been consistent around the globe. High rates of undiagnosed HCV patients, neglected and marginalized high-risk groups, a lack of national strategies and action plans for HCV management, risk of early hepatocellular carcinoma recurrence in those cured of HCV, extremely high prices and uneven access to DAAs – these are the main areas that need immediate action.

Experiences from my country, a middle-income nation, have shown that a multidisciplinary team of highly involved and motivated professionals that lead the long-term organized management of viral hepatitis at the national level may yield satisfactory results. In Slovenia, historically, all the currently recommended standard-of-care treatment options have been available and accessible including the new DAAs, and hepatitis treatment is fully publicly funded.

The national multidisciplinary network for the management of HCV in PWID enabled HCV treatment with 95.4% adherence and allover 80% sustained virological response (SVR) even with peginterferon/ribavirin. Projecting the future burden of HCV infection in Slovenia has shown that by scaling up the annual number of newly diagnosed and the number of annually treated patients, Slovenia could reach a 90% reduction in HCV prevalence by 2030.