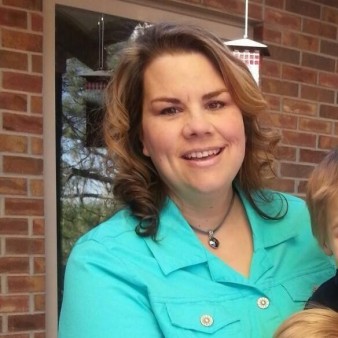 The girls who drew my blood in the lab were laughing about my doctor’s reputation for checking every box on a lab slip. I had delivered four children by this time, and every pregnancy came with a standard HIV test; hepatitis C was never mentioned or tested. I had never been asked about hepatitis C risk factors. This doctor just happened to check that box, and I am so glad she did.

I wasn’t completely devastated upon receiving the news of my diagnosis because honestly, I didn’t know enough about hep C to be scared. It was before I was heavily connected to Dr. Google, so I really didn’t know what to think or feel. Worst of all, no one told me anything about hepatitis C. This is why I am passionate about raising awareness. I wasn’t provided with any resources, any real follow-up, or support group listings or information.

One thing I did know about was the stigma attached to hep C, so I didn’t want to tell anyone I had it. I was a Sunday school teacher, heavily involved in my church. Although I did have a blood transfusion in 1988, I also had some wild partying days, left behind more than 20 years ago. I never looked back, and decided never to share my past unless I thought doing so would help someone. I didn’t want my party days to be a badge of honor or a source of glory or pride. My husband, James, and our kids knew me as a stay-at-home conservative Christian homeschooling Sunday school teacher. So many labels and none of them leave room for a drug-addicted teenager living on the streets of Houston.

The first thing we did was get all of our children tested. One came back positive for the antibody. As before, I wasn’t given any kind of follow-up, and was offered no resources. I wasn’t even told that this was just an initial test and that he could be positive for the antibody yet cleared of the virus. Thankfully, my son who was diagnosed cleared the virus on his own.

However, we lived for over a year thinking he was positive for hep C. His dreams of joining the military were dashed. At that time, interferon was the only treatment, and not yet approved for kids. I experienced a lot of fear and guilt that year, and we didn’t share my diagnosis with anyone. I am so glad we didn’t disclose it. I understand the shame, the whispers and misinformation. I never begrudge anyone who keeps it a secret. I kept it hidden for the first several years. I told no one; not my pastor or my church, both of whom were like family to me. I did share with my dad, who changed the subject and started talking about losing his keys. My mom allowed me to talk but never asked questions. She never called me to see how I was doing. I kept a dialogue open with her for my own sake, and for my own health. I knew if I retreated because of the hurt and shame, the bitterness would grow, fester, and build up into something too ugly to brush off. As hard as it was, I kept my heart open and worked on not becoming jaded because of my secret shame. My pastor had taught a great deal about forgiveness and not allowing bitterness to take root. This teaching was invaluable with this disease because there are so many whispers, so much judgment, and so many assumptions.

In 2011, just eight weeks after my sixth child was born, I was scheduled for a simple, routine liver biopsy done as an outpatient procedure at the hospital. The doctor accidentally cut an artery in my liver and almost killed me. Typically, liver biopsies are quite safe; this was just an unfortunate turn of events in my case. I was in the ICU fighting for my life, unable to hold my baby much less nurse him. I had been exclusively breastfeeding, and I was forced to wean my baby. (Not all health care workers know, but breastfeeding with hep C is recommended and encouraged.) I spent many nights in the ICU and had two procedures to repair the internal bleeding. My husband and sister were told I might not make it. I was in the hospital for over a month, sent home on oxygen, and was basically bedridden for about a year.

All of this happened after I had moved, leaving my church and hometown of 16 years. We had moved to Colorado, and I knew no one. When a woman I barely knew visited, I didn’t think much about the consequences of sharing with her about why I was having a liver biopsy in the first place. I told her I had hep C; it was the first time I shared, and it didn’t take long for the news to spread.

The reason I am so vocal and open about my story today is not because I am not bothered by the stigma or the assumptions attached to having hep C. These things bother me. I fight embarrassment every day, and still I share, because my shame is less important than helping people who are dying because they don’t know where to turn. My embarrassment is less important than advocating for those who can’t share because they have stage IV cirrhosis and no one to help them make phone calls and push through the bureaucracy and paperwork in order to get hepatitis C treatment.

Honestly, I never intended to share and be so vocal. My husband was my inspiration. When I was recovering from my liver biopsy, James got to work teaching our children and me how to serve others. He started www.climbingforcarleen.com. He and my son climbed Mount Rainier last summer. Recently they signed up to climb Mount Shasta this summer on behalf of the American Liver Foundation. They are looking in to climbing a volcano in Mexico to raise hep C awareness. That’s not all. James is a visionary and is in the baby stages of planning a cross-country excursion with our kids and me in tow. We will be spreading the word, encouraging testing, and sharing hugs and support with those who need it. We homeschool our kids and will soon road school them. They will learn algebra out of a workbook, but they will also learn something much more important. They will learn about compassion, love and service to those who are sick and suffering while living in shame and silence.

The whole family is excited. My 12-year-old often draws me pictures in yellow and red, a nod to the hep C awareness colors. He also passes out pamphlets about hep C and is already signing up sponsors for a Liver Walk that is still months away. My 15-year-old daughter sat outside Wal-Mart to raise awareness. My 7-year-old went door-to-door sharing pamphlets from the American Liver Foundation. So, whether I like it or not, I am a patient advocate because God gave me this passionate, selfless group of people—my own family members who are determined to make a difference.

I am more excited about sharing and advocating than I ever have been because there are new drugs available. Miracle drugs...drugs with high cure rates and few side effects. This disease is a silent killer because many people don’t know they have it until they are sick. We need to test people early, and make these drugs available to everyone. I am applying for the drugs; I was denied and am reapplying and calling and filling out the paperwork. It’s a process but a worthy one.

What is your greatest achievement?
Six healthy children!

What is your greatest regret?
Refusing to be vulnerable

What keeps you up at night?
Working as a patient advocate for the liver disease community

If you could change one thing about living with viral hepatitis, what would it be?
I would like to get Harvoni yesterday.

What is the best advice you ever received?
Throw your heart open despite the fear, and lean into the pain

What person in the viral hepatitis community do you most admire?
Kim Bossley

What drives you to do what you do?
Greed: I love to serve because it makes me feel so good, which makes me greedy that way!

What is your motto?
A smile is a ministry.

If you had to evacuate your house immediately, what is the one thing you would grab on the way out?
My kids

If you could be any animal, what would you be? And why?
A dog so I could sleep all day, be loyal, and get my belly rubbed