Preparing for a great revolution in hepatitis C care, the major players in the treatment game are moving their drugs into position for a mad dash toward achieving blockbuster status. 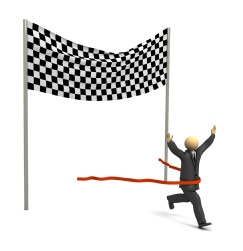 It’s a race to the top. A handful of pharmaceutical companies are betting billions in research and development dollars on a pretty prize: an estimated $20 billion market in global drug sales.

The result will also mean that potentially millions of people will be cured of the hepatitis C virus (HCV).

If current trends continue, hep C care will undergo a complete revolution in another 18 to 24 months. The disease should be curable relatively easily, through simplified, all-oral drug regimens combining two or more direct-acting antivirals (DAAs), possibly given in a single, coformulated pill.  The regimens will shed the need for injectable interferon and its dreadful, flu-like side effects, and they might possibly nix ribavirin as well. Treatment duration should fall from the current range of 24 to 48 weeks to as short as 8 to 12 weeks for many. And while today’s available DAAs, Victrelis (boceprevir) and Incivek (telaprevir), have cure rates of only 50 to 75 percent, the promise of a virus-free life should soon hover in the high 90 percent range for those taking the new hep C cocktails.

All this hope is dependent, of course, on clinical trials data panning out and on the U.S. Food and Drug Administration (FDA) giving its stamp of approval. Whether insurers will pay for what could be extraordinarily high prices for any particular drug versus another is a different story; and the payers’ discretion may very well drive which drugs become the standard of care.

“Gilead [Sciences] has the best drugs in combination,” he says. “It looks like sofosbuvir plus ledipasvir, maybe you have to add ribavirin with some people, will cure just about everybody. It’s genotype-independent; it’s almost without side effects. Sofosbuvir appears to be an unbelievable drug, almost too good to be true. It’s amazing.”

Having applied in April for FDA approval of the nucleotide analogue sofosbuvir, Gilead recently released highly promising interim results from a Phase II trial, called LONESTAR, of the drug in combination with the company’s NS5A inhibitor ledipasvir. Both with and without ribavirin, the combination had near-perfect cure rates. On the horizon is a Phase III trial of the two drugs as a fixed-dose combination pill, and the company anticipates filing for FDA approval for the pair by mid-2014.

Wall Street, for one, seems to place its bets on Gilead, thanks to its thus-far unbeatable sofosbuvir. From a low of $16.66 in mid-2010, the pharmaceutical company’s stock price has risen almost exponentially. Following the LONESTAR announcement, the stock hit its highest price ever of $55.81, having more than doubled in a year.

Andrew Aronsohn, MD, an assistant professor of medicine at the University of Chicago Medical Center, argues that it’s “still too premature” to read the hep C treatment tea leaves. “I think Gilead is certainly the front-runner,” he acknowledges. “But I think there are a lot of other companies that have very promising agents. Time will tell. You can only learn so much from clinical trials. Real world experience is going to show us what the true winners are going to be.”

In fierce competition with Gilead are the pharmaceutical companies AbbVie and Bristol-Myers Squibb.

In a move that has rankled hep C advocates, Gilead hasn’t pursued further study of sofosbuvir and BMS’s replication complex inhibitor daclatasvir in combination, despite 100 percent cure rates in recent studies. But, if BMS can release daclatasvir quickly enough, even though it will not be FDA-approved as a combination therapy with sofosbuvir, clinicians may prescribe the drugs together “off-label,” using available clinical trial data to both guide their prescribing and to convince insurers to pay.

Meanwhile, BMS is developing a triple combination of daclatasvir, asunaprevir and BMS-791325, which cured 88 to 94 percent of treatment-naive people with genotype 1 of hep C in a Phase II trial that was presented at EASL, a European meeting of liver specialists. Those figures are actually depressed somewhat because most of those who were not cured either discontinued therapy or were lost to follow-up. BMS intends to move these drugs, which are given without interferon or ribavirin, into Phase III trials by later this year. The process will be sped along thanks to the FDA giving “breakthrough” status to the combination treatment, allowing a faster review process and a potentially shortened clinical trial period. The company also intends to file for a dual therapy of daclatasvir and asunaprevir, given with ribavirin, during the first half of 2014.

“I’m surprised how slowly daclatasvir seems to be going compared to how fast Gilead seems to be able to take their drugs through,” Fierer remarks. “It’s astonishing to me; I don’t know how [Gilead is] doing it.”

A trio of AbbVie drugs have also received breakthrough status thanks to the results of a Phase II trial of the NS3/4A protease inhibitor ABT-450 (boosted with ritonavir), the NS5A inhibitor ABT-267 and the non-nucleoside polymerase inhibitor ABT-333, in which 99 percent of treatment-naive study participants were cured along with 93 percent of those who had failed a previous therapy.

Once drugs make it to the market, then comes a potential pricing skirmish.

Qualifying his winner-takes-all argument, Fierer says, “The reason I think that the Gilead drugs [will] take all the market is because they appear to be so much better overall—a combination of efficacy, pill count, and side effect profile—in addition to simply being available first. With that combination of great characteristics, being out first means that they will have the market to themselves initially, and the only way to break into that would be to charge a lot less.”

Michael Ninburg, executive director of Hepatitis Education Project in Seattle, says, “I think there’s going to be a lot of opportunity for some of these smaller players to price strategically, to get into contracts with some of these larger managed care groups.”

It’s worth nothing, however, that similar hopes for competition driving down prices were raised before Victrelis and Incivek’s release.  Both wound up priced steeply.

Whatever the cost of the drugs themselves, Ninburg hopes that capitalism and public health will merge with the release of new combination therapies as pharmaceutical coffers open in campaigns to raise awareness and get as many people on therapies as possible—before the next phase of the revolution.