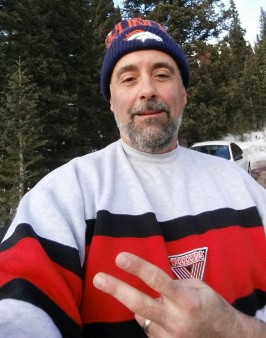 I am 54 years old and contracted hep C in March 1983. I know the month and year that I got the dragon because I tried intravenous cocaine once. I was diagnosed in 1995 after not feeling well for about a year. I had genotype 3a, which is the hardest to cure. A liver biopsy showed I had mild fibrosis. I was devastated and tried interferon for three months, but I relapsed. I waited for interferon and ribavirin, which I took for a year. It was pure hell and I relapsed again.

I took 10 years off and waited for better treatment. In 10 years’ time, my liver disease progressed to compensated cirrhosis, even though I had stopped drinking in 1995. I was shocked. Next I tried Pegintron and ribavirin for two years straight. It was rough, but not as bad as the earlier year of treatment. I relapsed again and felt like I was doomed. I didn’t think I’d ever be cured and that I would die by the time I was 60. My hepatologist, Sanjeev Arora at the University of New Mexico Hospital, had been my doctor just about since the beginning. He said he was going to cure me but I was losing hope. Then came Sovaldi, which I took with Pegintron and ribavirin for three months. Voilà: I was declared cured by Christmas 2014. It was the best Christmas present ever.

For my peace of mind, I had a viral load test in the fall of 2015. The virus is still undetectable and my liver enzymes are normal. Lucinda Porter was so helpful to me during 2015. I worried a lot about a late relapse as I waited for my one-year follow-up test. I tend to be a worrier. I will be forever very grateful to Dr. Arora and Lucinda for being there for me in my time of sickness and worry. They are the best!

I now get ultrasounds and tumor marker checks every six months to watch for cancer due to the cirrhosis. I hope my liver heals some. I am really starting to feel like my old self. I am working, skiing, and riding my Harley. Life is great for my wife and me. We don’t worry about my health anymore, and look forward to growing old together. These new drugs are a miracle. I just wish they were more affordable. God has blessed me with a second chance at a healthy life and I want to pay it forward. Don’t give up hope. I believe that hep C in our society will be a thing of the past in just a few more years.

What three adjectives best describe you?
Happy, kind, and humble

What is your greatest achievement?
Beating hepatitis C

What is your greatest regret?
Messing with drugs

What keeps you up at night?
I sleep well.

If you could change one thing about living with viral hepatitis, what would it be?
All the worry that I lived with pretty much 24/7

What is the best advice you ever received?
Be happy with what you have and don’t worry about what you don’t have.

What drives you to do what you do?
I want to live a long life.

What is your motto?
Be kind and humble.

If you had to evacuate your house immediately, what is the one thing you would grab on the way out?
My wife and my dogs

If you could be any animal, what would you be? And why?
A dog, because they give unconditional love