In fact, we borrowed $88 billion last year. Yet a new survey finds “a great political divide” in our satisfaction with health care.

Yet nearly half (45 percent) of the general population believes that the quality of care in the United States is the best or among the best in the world. Breaking this down further, 67 percent of Republicans believe this, compared with 38 percent of Democrats. But most everyone (75 percent of all Americans) agrees that we pay too much for the care we receive and that the government isn’t doing enough to control the costs of prescription drugs. 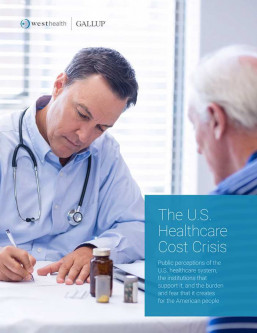 The survey was conducted by analytics firm Gallup along with West Health, a nonprofit, nonpartisan group dedicated to lowering health care costs for seniors. The results are published in a report titled The U.S. Healthcare Cost Crisis, which you can download here.

“Not only do you have a real significant number that are deferring care, forgoing care altogether, you also have a big chunk that are getting the care but having to borrow to get it,” Dan Witters, Gallup senior researcher, told CNN in an article about the survey. “There are few Americans out there who are safe from the American health care cost crisis.”

This financial anxiety prevails despite the United States having spent more than $10,700 per person on health care in 2017, according to federal data reported by CNN. This is higher than any other country, and yet when it comes to major indicators of health, America often ranks toward the bottom compared with other developed nations.

Despite frequent talk among politicians about lowering health care costs—notably the high price of insulin—most Americans across the political spectrum aren’t optimistic about reform.

“Particularly in today’s political climate, all too often, we are focusing on the policies and legislation and not the problem that needs to be solved,” Tim Lash, chief strategy officer for West Health, tells CNN.

The executive summary of the report lists five key findings:

“While there may be a great political divide in how highly Republicans and Democrats perceive the health care system at large,” says Lash in the press release, “there is very little that separates the groups when it comes to the real-life consequences of the high cost of health care on their everyday lives.

“The time has come to take politics out of the equation and deal with the realities of the health care cost crisis with bipartisan and common-sense solutions that serve all Americans.”