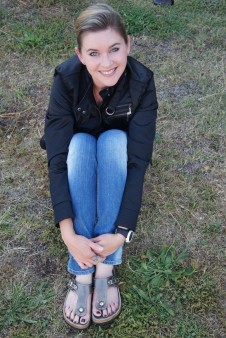 Sadly, most people assume injection drug users become exposed to hepatitis C through sharing needles. This was not the case for me. The first week that I started to use drugs, I was the unfortunate recipient of a needle-stick injury. However, now I am actually grateful for this event, because it taught me how to deal with feelings of isolation and discrimination. Before becoming another hepatitis C statistic in the injection drug community, I had absolutely no idea of the meaning or feeling of what it is like to be a person that is the subject of much stigma. As a result, I treat others better, believing that drug users deserve the right to be free from the hurtful nature of stigma.

Following the needle-stick injury, it was not long before I developed symptoms of acute hepatitis C. For example, I turned yellow (jaundice) and found it hard to keep down food. On the outside, I looked like there was something wrong with me. On the inside, I was holding a terrible secret. I was a high-achieving university graduate at the time, and nobody suspected that I was also an intravenous drug user with a daily dependency on black-market methadone. My drug use was a secret that I loved, as it was a way for me to distract myself from the reality that was around me: I felt stuck in my life, and desperate for any way to escape. When the day arrived that I could no longer refrain from going to the doctor, I made up a story, so that I could deter my doctor from suspecting what was really wrong with me. Because I gave no clues away, my doctor first diagnosed me with Gilbert’s syndrome, also associated with jaundice. She decided to run a few blood tests, which also happened to include hepatitis C.

Indeed, the blood tests revealed that I was hepatitis C positive. Of course, I already suspected this, but nevertheless, I still managed to act shocked and surprised. The confirmation that I was hepatitis C positive was a reality check for me. However, I did not know whether to feel scared that my family would find out their daughter was an intravenous drug user, or happy that I had an excuse to continue to use drugs. The news that I had hepatitis C reinforced the negative view I had of myself. Rather than feel the sting of the stigma, I managed to keep my hepatitis C status a secret. Nobody suspected I was a drug user, because I simply did not fit the stereotype of a “junkie.” This is when I started to realize that the world was an unfair place in desperate need of change.

Luckily, I never had to disclose my drug injecting use for some time thereafter. This is because I was lucky enough to spontaneously clear the virus within three months after being exposed to it. It is fairly common for women with acute hepatitis C to clear the virus on their own. I felt tremendous relief when the liver specialist delivered the news that I did not have to undergo treatment. At the time, only standard interferon and ribavirin was available. I was saved from the ordeal of having to admit to a secret life of injecting drugs, which I had no intention to stop.

With a sigh of relief, I continued to use. My growing sense of inferiority led me to start sharing utensils. I was infected with the virus for a second time within six months. At the time, I was convinced I would be able to spontaneously clear it again. This time, I was out of luck. And so, in late 2004, I was hepatitis C positive again.

Shortly after I was re-infected, I began a long and lengthy journey in and out of drug treatment facilities. Finally, I felt the pressure to admit to the truth: I was infected a second time with the hepatitis C virus by way of unsafe injecting practices, namely sharing a spoon. When the liver specialist heard my admission, he was stunned. I believe my appearance did not give rise to any suspicion that I was an intravenous drug user. Doctors never once asked me to reveal my arms for closer inspection; if they had, the evidence would have been clear. I did not look like a junkie or fit the stereotype. It says a lot about how the medical world might not know who is at risk for hepatitis C.

I had to undergo drug rehabilitation and ongoing counseling in order to prove that I was a valid candidate for treatment. I did everything as instructed, and I was fortunate to come out the other end as negative. However, this was not without the addition of a benzodiazepine dependency from being prescribed diazepam and alprazolam throughout treatment for the symptoms of insomnia and anxiety. While nobody can prove that they will never choose to use drugs again, I certainly spoke in all of the right recovery terms in order to give that appearance. In hindsight, it was part of my act, as I just wanted to get rid of the hepatitis C. I had no intention of not using drugs again, and so I did.

After treatment, I never felt that I was totally “cured.” There were often times that I would say that I felt tired, or could never imagine myself holding down a full-time job. Even when I went long periods without using drugs, I still felt like this. I mention this because sometimes people accused me of not ever have felt “cured” because I used drugs after treatment. Wrong. I actually went nine months after treatment without using drugs, and never during that time did I feel completely “cured.” I was never convinced that the interferon and ribavirin had worked, so neither was I surprised when three years after treatment, my annual hepatitis C viral load test came back positive with the same 3a genotype.

It was a timely reminder of my past, but most of all, it was a cruel dealing for someone who always had access to sterile injecting equipment, never shared needles and has always advocated for the safe use of drugs. Now I have to live with the unfair accusation that my re-infection was a result of “sharing needles.” Nobody believes that I never felt “cured” or that I never shared needles. However, this is my truth. Most of all, it just goes to show that discrimination does not think twice about the facts; it just sticks like super-glue to anything that it can find.

Afterword
Opiferum’s story originally appeared on the Hep C Support website. Opi has been very active in hepatitis C and harm reduction causes for many years. She holds a certificate in alcohol and other drugs, and is a licensed facilitator in mental health social support.

Currently, she is completing a diploma in counseling with the Australian Institute of Professional Counsellors and a post-graduate certificate in harm reduction at York University in Canada.

Opi is vice president of SWOP NSW (Sex Workers Outreach Project) and a general board member of Hepatitis NSW. She is waiting for a second course of treatment with sofosbuvir, which was newly approved in Australia.