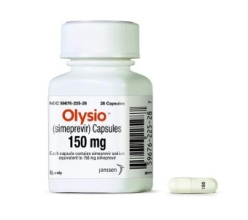 The U.S. Food and Drug Administration (FDA) has approved Janssen Therapeutics’ NS3/4A protease inhibitor Olysio (simeprevir) for the treatment of those with genotype 1 of hepatitis C virus (HCV) who have compensated liver disease, including cirrhosis. People who are treatment naive as well as those who have failed a previous attempt at a hep C cure may benefit from the drug, which is to be taken in combination with pegylated interferon and ribavirin.

“Given the complexity of the condition, Olysio was studied in a number of different patient populations, including individuals who have relapsed or failed to respond to previous treatments,” Douglas Dieterich, MD, a professor of medicine in the division of liver diseases at Mount Sinai School of Medicine in New York City, who was Olysio’s clinical trial investigator, said in a release. “The FDA approval of Olysio is an important milestone for people living with chronic hepatitis C as it means that patients have a new treatment option with the potential to cure this challenging disease.”
In clinical trials, the efficacy of the drug was markedly lower among those with genotype 1a of the virus who had the NS3 polymorphism Q80K, which is a variation in the hep C NS3/4A protease enzyme.

The approval was based in part on results from three Phase III studies, QUEST-1 and QUEST-2 in treatment-naive study participants, and PROMISE in those who had relapsed after previous interferon-based treatment for the virus. The Phase IIb ASPIRE study of prior non-responders also played into the decision.

To read an article about the hep C pipeline and the forthcoming revolution in care, click here.

Kratom Is Linked to Rising Cases of Liver Toxicity

Authorities Crack Down on the Illegal Online Opioid Market