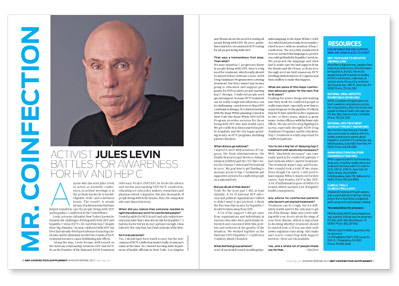 Anyone who has seen Jules Levin in action at scientific conferences, in activist meetings or at the podium knows he is knowledgeable, bold—and sometimes brash. The result? A steady stream of achievements that have helped transform care for people living with HIV and hepatitis C coinfection in the United States.

Levin, a 61-year-old native New Yorker, knows intimately the challenges of living with both HIV and hepatitis C virus (HCV). He cured his hep C despite three big obstacles—he was coinfected with HIV, his liver had already developed advanced scarring (cirrhosis), and he ultimately needed two rounds of HCV treatment known to cause debilitating side effects.

Along the way, Levin became well-versed on the intricate relationship between HIV and HCV. So as the founder of the National AIDS Treatment Advocacy Project (NATAP), he broke the silence and inertia surrounding HIV/HCV coinfection, educating not only policy makers, researchers and pharmaceutical companies, but also thousands of people living with both viruses. Here, the outspoken advocate shares his story. 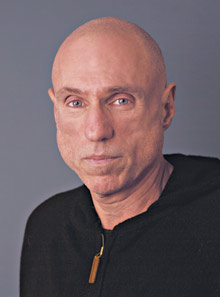 When did you realize that someone needed to light the advocacy torch for coinfected people?
I tested positive for HIV in 1987 and only realized several years later that I was also at risk for hepatitis C. I had my doctor test me in 1997, and sure enough, I was infected. Not only that, but I had cirrhosis of the liver.
So it was personal?
Yes. I should have been tested sooner, but the seriousness of HCV coinfection wasn’t really on anyone’s radar at the time. So I started meeting with department of health officials in New York, Los Angeles and Miami about the need for testing all people living with HIV. By 2000, guidelines started to recommend HCV testing for all people living with HIV.

That was a tremendous first step. Then what?
Because hepatitis C progresses faster in people living with HIV, there’s a big need for treatment, which really should be started before cirrhosis occurs. AIDS Drug Assistance Programs were covering treatment, but there wasn’t any money going to education and support programs for HIV-positive people starting hep C therapy. Coinfected people need special support, because HCV treatment can be really rough and adherence can be challenging—much more so than HIV combination therapy. So I started meeting with the Ryan White planning council in New York [the Ryan White HIV/AIDS Program provides services for those living with HIV who lack health care]. We got coinfection clinics started in public hospitals, and the city began spending money on HCV programs, including patient education.
When did you go national?
I started to meet with members of Congress, the Bush administration, the Health Resources and Services Administration [HRSA] and the CDC [the Centers for Disease Control and Prevention] in 2000. My goal was to get funding to increase access to hep C treatment and supportive services for coinfected people on a national level.
Did you do all of that alone?
Yeah, for the most part I did, at least initially. A lot of national HIV advocacy and political organizations I talked to didn’t want to get involved. I think the fear was that money for hepatitis C would be taken away from HIV.

A lot of the support I did get came from organizations and individuals in various cities who were particularly interested and concerned with this problem and understood the gravity of the situation. We worked together as the National HIV/Hepatitis C Coinfection Coalition, which I founded.

What did that group achieve?
A lot of our work focused on adding hepatitis language to the Ryan White CARE Act, which had previously been reauthorized in 2000 with no mention of hep C coinfection. The 2005 bill, reauthorized in 2006, needed this language so providers could get funds for hepatitis C services. We proposed the language and then had to make sure we had support from the Senate and the House, so from 2001 through 2006 we held numerous HCV briefings with members of Congress and their staffers to make this happen.
What are some of the major coinfection advocacy goals for the next five to 10 years?
Pushing for newer drugs and making sure they work for coinfected people is really important, especially now that so many drugs are in the pipeline. It’s likely that we’ll have interferon-free regimens in two or three years, which is great news—better efficacy with far fewer side effects. We also need to keep fighting for access, especially through AIDS Drug Assistance Programs, and for education. Hep C treatment is really important for coinfected patients.
You’re not a big fan of delaying hep C treatment until absolutely necessary?
Well, “absolutely necessary” can come really quickly for coinfected patients. I had cirrhosis when I started treatment. The treatment wasn’t easy, and for me, [two rounds] took a total of two years. Even though I’m cured, I still need to have regular MRIs to watch out for liver cancer. And besides, HCV is like HIV. A lot of inflammation goes on before it’s treated, which can have a lot of negative health consequences.
Any advice for coinfected patients who haven’t yet started treatment?
Treatment can be rough, but it’s definitely doable and it’s the only way to get rid of the disease. Make sure you’re talking with your doctor about the stage of your liver disease, which is important in deciding whether treatment should be started now or if you can wait until newer regimens come along. Also make sure you’re connecting with support services—there are lots available.

Yes, and a whole lot of people thank you for that.

Resources
For information and support, Here are some places to start.

Hep: Your Guide to Hepatitis (hepmag.com)
Hep offers unbiased news, updates from major liver conferences, full information on hepatitis A, B and C, forums for people living with hepatitis (including HIV/HCV coinfection), a directory of services across the country, and more.
462 Seventh Ave., 19th Fl., New York, NY 10018.
Phone: 212.242.2163

Clinical Trials (clinicaltrials.gov)
A National Institutes of Health website with a searchable list of all hep C clinical trials in the United States and globally (with contact info and inclusion criteria).