The study included 28 treatment-naive, non-cirrhotic people with hep C, half of whom had genotype 1a and the other half 1b. They were randomized to receive a single oral dose of 10, 30, 100 or 200 milligrams of EDP-239, or to receive a placebo.

The drug led to a rapid decline in hep C viral load after about two hours, with maximum effect achieved after two to four days. The maximum viral load drop seen was between two and more than four powers of 10.

EDP-239 showed the most potent activity against the virus at the 100 mg dose. The next most potent dose was 200 mg. The drug was more active against genotype 1b than 1a.

The researchers concluded that the study supported the further development of EDP-239 to treat hep C. 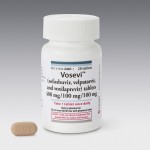