The 3D regimen includes a fixed-dose combination of ABT-450 and ritonavir coformulated with ombitasvir (ABT-267) as well as dasabuvir (ABT-333) and is given with or without ribavirin. The FDA is expected to issue a decision about the drug’s approval by the end of the year.

Ninety-one members of the PEARL-II trial, who had all failed a previous attempt at a cure, and 209 members of the PEARL-III trial, who were all being treated for the first time, took 3D for 12 weeks with no ribavirin. In the two trials, a respective 100 percent and 99 percent of the participants were cured. Considering that these cure rates were similar to the rates for those who did take ribavirin with the 3D regimen, the researchers concluded ribavirin made no difference in treatment outcomes.

David Bernstein, MD, chief of the division of hepatology at North Shore University Hospital in Manhasset, New York, said that, if approved, 3D will add “another very good regimen for a specific patient population. It’s a very well-tolerated regimen. And I think the more regimens we have out there—the more choices—the better it’s going to be for patients and practitioners.” 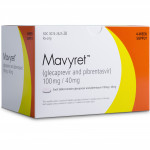